Two biogas plants have been built on waste dumpsites in North and South Goa to generate energy from food waste. More than 350 megatons of waste are dumped at the two landfills every day. Waste that used to have to be deposited in landfills. This has changed with the construction of the biogas plants. A separation process segregates the food waste from the rest of the waste. There are many reasons for the construction of the biogas plants. On the one hand, they want to prevent waste from being landfilled, which would further increase the need for space. On the other hand, waste means energy, which can be obtained through technical processes.

The North Goa biogas plant
The plant in Calangute/Saligao Village in the North Goa District was finalised in December 2021. The plant was constructed on an existing dump site. Approximately 70,000 MT of legacy waste was remediated and disposed-off to construct the plant. The entire landfill has a land area of 113,086 square metres. Every day, 250 megatons of waste arrive at the plant. From dry waste, recyclables are recovered and sold to local recycling vendors for further recycling. Biogas is produced from the wet waste in the plant, which is used to generate electricity. The residues are subsequently composted. The two tanks of the biogas plant have a diameter of 20 metres and a height of 7.5 metres. The plant supplies 1,372 megawatts. The electricity is fed into the power grid. The waste heat generated by the process is in turn used to heat the two tanks.

Agitation technology 'Made in Germany´
The substrate is food waste from private households and commercial enterprises with dry matter content from 10 - 12 %. First the organic waste is separated from the municipal solid waste. The substrate demands certain requirements of the agitator technology used. The shredded organic substrate has a fibre length of between 5 and 20 mm.

The plant operator opted for SUMA. The decisive factors in his decision were the high quality of the agitators, the competitive price, fast response times and professional project handling. To achieve the appropriate agitation performance, three OPTIMIX 2G 150-275 submersible mixers were installed in each of the two tanks. The agitator has an output of 15 kW and a thrust of 4.1 kN. The high efficiency of the motor ensures energy-efficient operation.

The proper placement of the submersible mixers plays a decisive role. After several simulations by SUMA, the right setting for the installation was found. The submersible mixers form a unit with a gastight ceiling lead through. The gastight ceiling lead through GDD is a product developed by us and optimised in terms of serviceability for biogas tanks. It is installed on the ring top of the tanks and enables easy positioning of the agitator in the tank. The submersible agitator is lowered to the desired position on the mast. The GDD can be swivelled horizontally up to 360°, depending on its positioning in the container. In addition to the built-in inspection glass, a height indicator is included to determine the exact height of the agitator in the tank.

The innovative gastight lead through prevents gas from escaping at the duct. The GDD is made entirely of stainless steel in the area in contact with the gas. The service box with maintenance unit makes it easy to carry out service work on the submersible mixers while the system is in operation. The service flaps close automatically when the agitator is raised. The flap mechanism significantly reduces gas loss during service work.

New plant in South Goa modelled on the North Goa plant
The operator is so satisfied with the performance that similar specifications were used for the second plant in South Goa. The plant in Cacora Village, South Goa District is slightly smaller than its counterpart in North Goa. It has two tanks, each with a diameter of 16 metres and a height of 7.5 metres. Four gastight GDD, each equipped with OPTIMIX 2G 150-275 submersible mixers, were installed in the plant. It is to supply 0.8 megawatts. The foundations for a functioning plant have been laid: the concept in North Goa has proven itself. 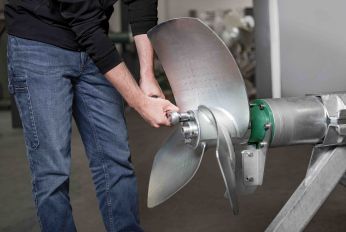 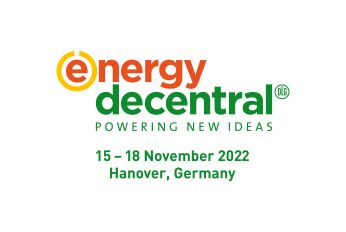 19.10.2022
SUMA at EuroTier/EnergyDecentral
EnergyDecentral in Hanover is considered the leading international trade fair for decentralised energy supply. We will be there with our products and will be happy to advise … further information 1649
27.09.2022
Central Mixer Z-MIX - More than just an agitator
SUMA launches the Z-MIX, a central agitator, thus expanding its comprehensive agitator technology range. The agitator is designed for use in biogas plants and in various … further information 1595